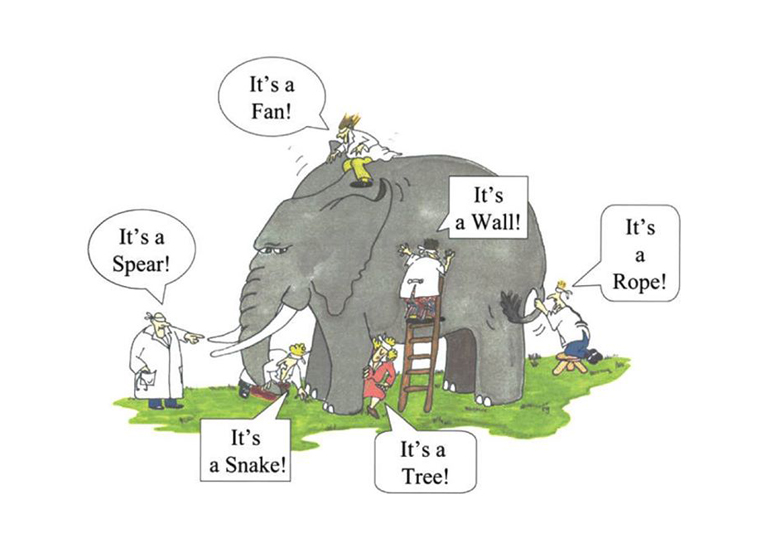 Illustration of 'The Parable of the Blind Men and an Elephant', but with blind scientists (author unknown)
Talk What is dis- order? at 1.1 in Basel
The project dis- order functions as on- and offline locus for a continuous transdisciplinary reflection on the question ‚what is dis- order?’ in order to analyse and review contemporary structures of norms / standards in thought, politics and our society.
dis- order visually dissect ‘dis- order’ as a word-to-re-read, split into ‘dis-’ and ‘order’ by a hyphen and blank space, emphasising its ‘multi-system complexity’ [Patricia Reed]. The term ‘dis- order’ acts as an entry-point – a ‘rupture within a given system’ [Reza Negarestani] – for localised, transdisciplinary (re-)readings, as we (re-)scan histories, thinkings and feelings through conditions of language, politics and society.
The interlocutors and guests of dis- order are invited to ‘dis- order’ and 're-read' the spaces and systems they part-take (e.g. a monetary system, a social system, a mechanic system), rescanning histories, workings and rules from a local towards a global understanding through the question ‘what is dis- order?’.
As we pose this question continuously we reach into a complexity of positions, experiences and perceptions, while untangling truth in the multitude of viewpoints to take on and think through, trying to break from the constant feedback loop of sameness searching for sameness and reassurance, while looking for the unknown, the other, the out of sight, the invisible, the in-between, the imbalance, the dis- in order.


dis- order publishes work that is conducted in a hypothetical or applied, theoretical or artistic way through experiment and play, whereas the focus is on the state of research (work in progress) rather than the state of conclusion.


dis- is a prefix that produces a related word or an inflectional form of a word, trough a turning point, a turning around of meaning, indicating, either reversal, negation, removal or release, sometimes through expressive intensive force.

order as a transitive verb arranges, commands or regulates one state into another.